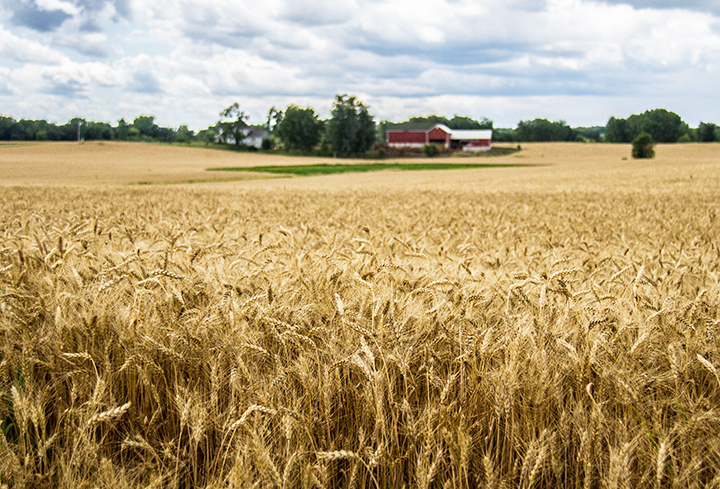 Labudde Group started in 1907 handling byproducts of the brewing industry in Milwaukee. Its sometimes hard to wrap your head around the fact that farmers and feedmills have had sustainability on their minds before it was the “it” word in agriculture. Along with brewers grains and malt sprouts from beer production, Wheat Midds have been around forever for animal feed use, because we have been eating flour for, well, hundreds of years.

What is a Wheat Midd, also called Wheat Middlings, or wheat shorts, or wheat mill run? Think of it as everything left over when you process wheat for flour. The bran from the outside of the wheat kernel can be included or separated and sold as its own product, the wheat germ, cleanings from the process, or off spec flour. Though sometimes used in pet food treats, Wheat Midds have been a staple for cattle, swine, and poultry. It can vary a lot in nutritional make up depending on the plant it comes from. This is why it isn’t used as much in pet food or mixed feeds that need consistent nutritional output. This is also why Wheat Midds sometimes get a bad rap from nutritionists. Wheat Midds fall into that group we call “Mid Protein” feeds like our friends Malt Sprout and Corn Gluten Feed. Offering 18% protein and 4.5% fat it is an alternative for corn in the diet of dairy cows. It adds starch and energy as well as protein into the cows’ diet. Because of the inconsistent nutrient content, most farmers and feed mills want it priced less than corn to substitute it into the diet.

Again we see that for over 100 years, agriculture has taken sustainability not as a new fangled idea, but how we manage day to day. There is not a single thing to do to be more sustainable. It is small steps that help utilize what some would consider waste into valuable meat and milk for humans to consume. It’s hard to even figure out the tons of wheat midds that are fed to cattle every day. Plants produce wheat flour all over the US.

Sustainability on the farm is everywhere. Manure as fertilizer, utilizing old tires as weights on silage bunkers, reusing tubs that the cleansers and bleach come in for sanitizing the facility as garbage cans. My favorite sustainable practice from growing up on the farm? Using baler twine for everything!!! You think duct tape is handy, try used bailer twine off of hay bales. Secure a gate, tie up a hose so it won’t unroll, and I believe it even worked to hitch my wagon to my pedal tractor!! We never needed bungee cords to secure products in the back of the truck – that’s what the pile of bailer twine was for. Farms are the epicenter of reuse and recycle, but it isn’t very flashy. In fact if you ask them, few will consider it as “being green”. It is instead the way things have always been done. Why buy something new when something you already have may work perfectly for the job you have to get done. What do you use to define sustainable? How can you make small steps to make the food system more sustainable?